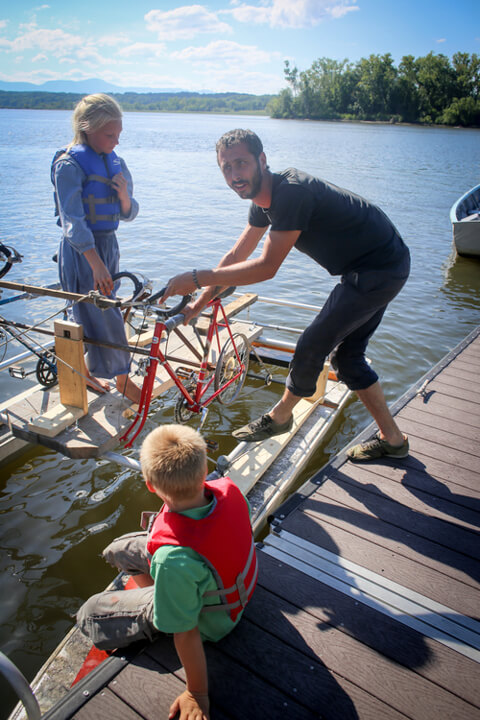 Sam Merrett is a mechanic who refits vehicles to use alternative fuel (vegetable oil) in a workspace he created with artist Chris Perry at the former LNB building, a significantly large industrial space by the Hudson River whose previous occupant had been a furniture factory that had over 200 employees.   He is approximately 30 years old and lives in nearby Greenport, after having lived in four different apartments over four years in the city of Hudson.  Sam Merrett grew up in Rensselaer county and followed friends to Hudson after he resided in Oberlin Ohio for six years and attended Oberlin College, where he graduated in 2005.  He is interested in environmental issues and collective community spaces, and is very involved in progressive cooperatives in the Hudson community.  In this life history interview, Sam Merrett also speaks about his education at the Buxton Preparatory School in Williamstown, MA and his participation in cooperative communities in Oberlin.  He also speaks about a barter-based collective community he is building in Greenport, tentatively referred to as Bear Fist.

People who might be interested in this interview include those who are interested in: artist migration, adaptive reuse of industrial spaces, collective communities, alternative education, the Sloop club, alternative fuel retrofitting, bartering economies and progressive community creation in Hudson.

Emily Gallagher: I am a 29 year old female at the time this interview was conducted. I am a project participant because of my enrollment in Oral History Summer School, which I've attended both for personal projects as well as for my work at the Lower East Side Tenement Museum in New York City. I live in Brooklyn, New York and work there as a social public history educator and community organizer.