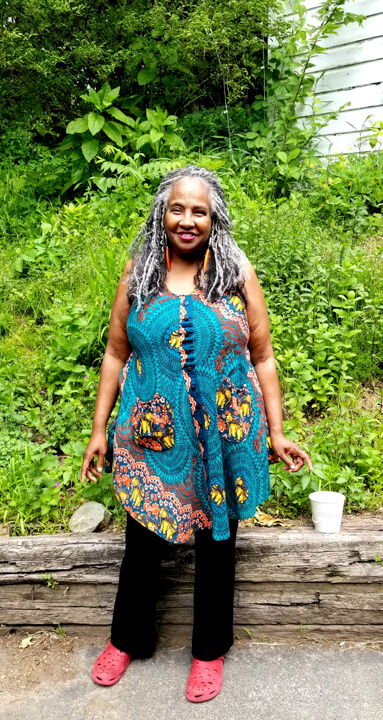 This interview was conducted in Philmont, New York on June 15, 2019 with Roxanne Wilkins. She is a widow, the mother of six children and has worked for over forty years with families in crisis. She shared that she and her second husband first came to Hudson New York in the late eighties to care for a family member and later decided to make their home in the Hudson area. She explained when they first arrived they experienced the love of strangers. She recalls that she and her children often prayed and saw the benefits of their prayers. She said, “The Father provides.” She recounts how her husband was traumatized growing up in the foster care system. He experienced racism at his job at the Charter Supply, white workers called him the “N word.” She discusses that going to work for him was stressful enough to make him sick everday, until one day it got so bad he walked away from his job. He died at age 48 from alcoholism. She describes her husband as an excellent human being, his spirit was profound. Roxanne quit her job when he became sick because she did not want him to go on the death journey alone. She says, “He needed the touch.”  She concluded the interview by sharing now that her mother is gone, she is the matriarch of the George and Jackson family.

This would be of interest to anyone who is interested in the racial dynamics of Hudson New York, school systems in Hudson, African-American un and/or under employment. African-American families, loss, grief, trauma, spirituality and faith.

A Black feminist woman, retired educator who has worked as a teacher, professional staff developer and school administrator. She facilitates book discussions on professional and personal development. As an oral historian giving "ordinary" women a public platform to share their stories is her post retirement commitment.