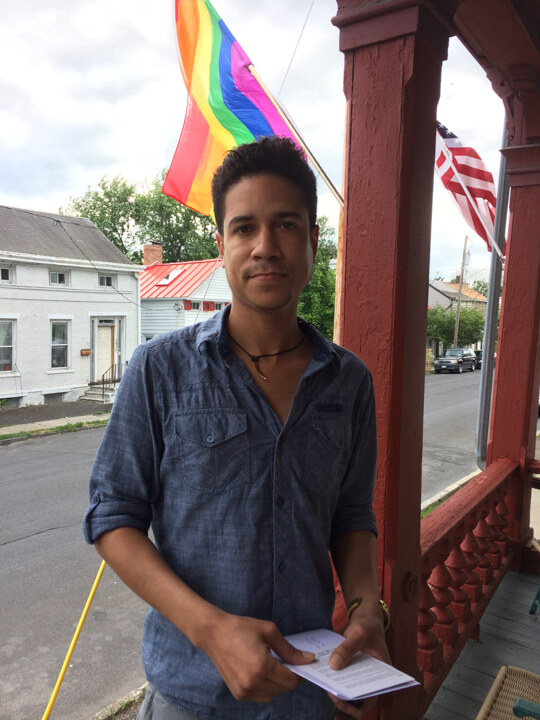 This interview was conducted with Othell Wilson at 3rd State guesthouse in Hudson, New York. Othell was raised in Raleigh, North Carolina and is the oldest child in a family of nine siblings. In the interview, Othell describes his move to Hudson a few years ago as one sparked by tragedy. Othell says he moved to the city to help his cousin care for a sick parent, who is now deceased. He discusses how it felt to be on his own for the first time and that in moving to Hudson he was in search of greater independence from his family, which he feels like he has found. Othell also discusses how his appreciation of this independence has changed since he suffered a major back injury while working as an AmeriCorps volunteer at a local school in Hudson. Othell describes how this injury occurred on a basketball court, and his long road to recovery.

Othell then speaks of the challenges that have faced him throughout his life as a gay black man growing up in the South, some of which have followed him to Hudson. Although he discusses being welcomed by Hudson’s LGBTQ community, Othell was the victim of a hate crime while on a first date with another man. The two were assaulted by strangers who attacked them with baseball bats. Othell suffered from PTSD after the assault and has difficulty speaking about the beating, but says he wants his story committed to the OHSS archive so that a young person can hear how he persevered. Othell reflects that his continued positivity despite being assaulted is the ultimate survival tactic in the face of hate, and he describes wearing his scars as badges of honor. Othell is now on disability and is not exactly sure what he will do in Hudson in the future, but he hopes to work with youth again.

This interview may be of interest to those who want to learn about LGBTQ issues; Hudson’s gay community; homophobia; hate crimes; disability; stories of physical injury; PTSD; familial relationships; familial conflicts; youth mentorship; and stories of recovery and survival through trauma.

Adriana Widdoes is a writer interested in experimental documentary forms. She earned her BA in Social & Cultural Analysis from NYU and her MFA in Writing and Integrated Media from CalArts. She is a regular contributor to KCET’s Departures, where she writes about social justice and the contemporary landscape of Los Angeles, where she lives.