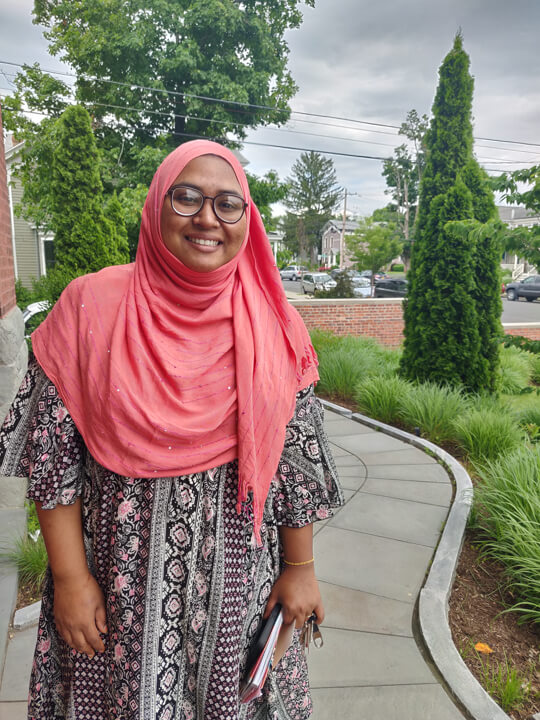 In this interview Jabin talks about her participation in various communities in Hudson. She discusses her involvement in the youth group, Time & Space Limited, when she was younger and the growth of youth programs in Hudson. She reflects on the types of friendships she’s made and talks about what it’s like to see longtime friend, Kamal, running for mayor. She discusses past Thanksgivings and celebrating them as a Bangladeshi family and what winters were like in Hudson. She explores American and Bangladeshi cultures and how family dynamics have changed since her marriage. She talks about the difficulties she faced as a Muslim girl after the September 11th attacks. She reflects on how she tried to fit in with her classmates when she was younger, liking an influential teacher and how she became more comfortable with her identity. Jabin discusses how she chose her academic and career paths. She talks about traveling to Bangladesh frequently and the importance of language to her. She recounts what it’s like to stand up for herself and gives a couple of examples. Jabin explains the principles and values that guide her daily life. She discusses being in an arranged marriage and reads a message to her husband in Bengali. She reflects on a springtime memory in Hudson.

This interview may be of interest to people who would like to learn more about the growth and value of youth programs in an American city; the experience of a young bilingual second generation Muslim Bengali woman in an American city; an arranged marriage in the the early 21st century; the experience of an activist who faced discriminated by her peers; the method and criteria for when a woman chooses to stand up for herself.

Nicole Galpern is a video producer and language documentarian based in Ridgewood, New York. She has documented endangered languages throughout New York City and in the Pamir region of Tajikistan. She is interested in her neighborhood, the public’s transition to the internet and what people regard as “wasted time.”