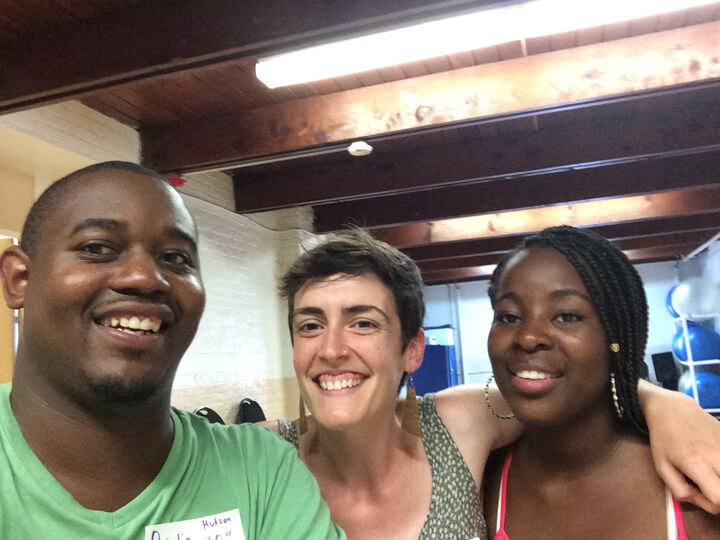 The interview with Irlande Louis (she goes by Stephanie, in America) took place on July 1, 2016 in the Youth Center in Hudson, NY. We were joined by Quintin Cross, who sat as a silent witness to the interview, as part of Oral History Summer School's day of collaboration with Social Justice Leadership Academy. My interview with Stephanie immediately followed an interview in which Quintin acted as the interviewer and I was the narrator/interviewee. During that previous interview, Stephanie acted as the silent witness (writing down a few questions and urging Quintin to ask them throughout).

Stephanie is 16 years old, she attends Ichabod Crane High School in Valatie, NY. She spoke about her experience at Ichabod Crane, including experiences of racism and school rivalry with Hudson. She talked about her visits to Hudson, where she lives during the summer and during weekends with her grandmother, as well as about her life in Valatie, where she lives with her aunt and cousins during the school week. Stephanie immigrated from Haiti to the US in 2011, and has been in Hudson since 2012. She lives with her extended family, and doesn't like how cold it is in upstate New York. Stephanie spoke about immigrating and her decision to leave Haiti, as well as the challenges of moving to a new country, adjusting to life with extended family, and learning a new language. She was particularly proud of mastering reading and writing, and she has written books in school about her journey to Upstate, her experience with Kite's Nest, and her gratitude for the people in her life who have supported her. Stephanie spoke about life in Haiti and cultural differences between here and there, particularly as it relates to rules about the family. Stephanie spoke a bit about Haitian community here in the Hudson area, particularly about Haitian churches. Stephanie also talked about what she enjoys doing, including running and playing soccer, drawing flowers, and writing poetry.   This interview may be of interested to: a) those interested in hearing from a teenager about her experiences in Hudson and Valatie; and b) a reflection from a young narrator about immigration, leaving home, and starting life in a new place.

Sammy Sass is a Boston-based artist, teacher, and activist. She is passionate about the practice of storytelling and connecting through word, both spoken and written. Sammy is the interviewer and curator of Gathering Voices, a community interview project collecting the stories and histories of young adults raised by LGBTQ parents. When not talking, she can be found writing creative non-fiction, poetry, and personal narrative. To this particular interview she brought an interest in working with young people and a background in adoption and specifically kinship adoption.