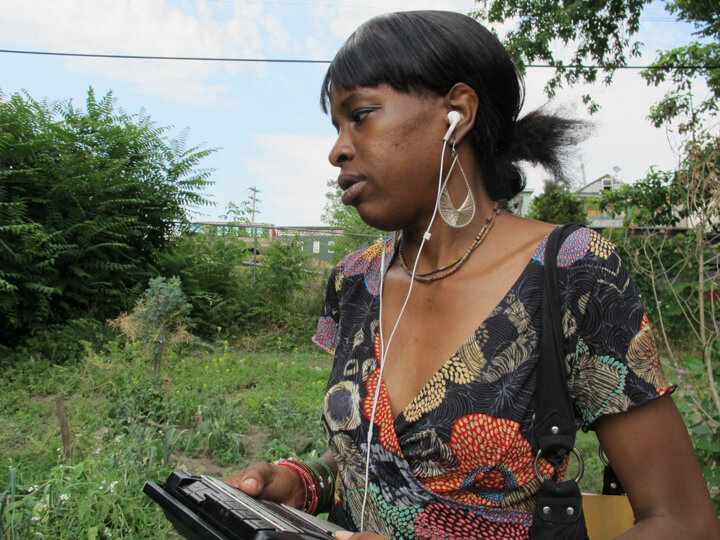 This interview with Ifetayo Cobbins was conducted in Hudson, NY on July 16, 2012 with an additional session in the form of a sound walk on July 18, 2012; both recording sessions were conducted as part of the Oral History Summer School 2012.

In this interview, taken on July 16, 2012, Ifetayo Cobbins, discusses her Childhood and life living in Hudson, NY. Cobbins describes herself as a local poet and somewhat of a town advocate She shares a sampling of her poetry in addition to sharing the background and meaning of her writing. Throughout this interview Cobbins discusses the current climate of Hudson, and her experiences with discrimination, her feelings towards the changes on Warren Street, and fears of displacement amongst specific populations.

Cobbins grew up on and around Allen St. In her youth, her mother, Janice Haines, encouraged her to be involved in various extracurricular activities, including dancing in the Cumba Club, hanging out at the Boy’s club with her brothers, the Library Club, in Art Workshops, playing at the John L. Playground, and various outdoor natural areas of Hudson. Cobbins discusses her experiences with Chrones Disease which started at the age of 10 or 11. She talks about being quiet in her youth, and her mother giving her a journal to use to express her self. She believes this was the day she became a poet. In this interview Cobbins discuses two changes that she’s enjoyed in the town of Hudson, including, the community garden and the various events at the Waterfront, which allows for community participation.  She has a plot at the Community Garden and sees this as another environment that’s open to various types of people and allows for  everyone in the community to be a part of. She sees this as good example of relations amongst various members of the community.

This interview may be of interest to people who would like to learn about Hudson, poetry, Warren Street business district, Second Show, Jean Deaux, the community garden , the Waterfront, living in Bliss Towers, segregation, dicrimination, The Boy’s Club, Cumba Club, Library Club,  Opera House, Hudson Library, Chrones Disease, feelings of being an Insider and Outsider in a hometown, tourism.

Josephine Shokrian has a background in 16mm experimental filmmaking and field recording practices. Her work looks at the intimacies of place, both in the interior and exterior environment. Her interests in attending the Oral History Summer School are to explore the methodologies of listening, recording peoples stories and learning about place through personal experiences.