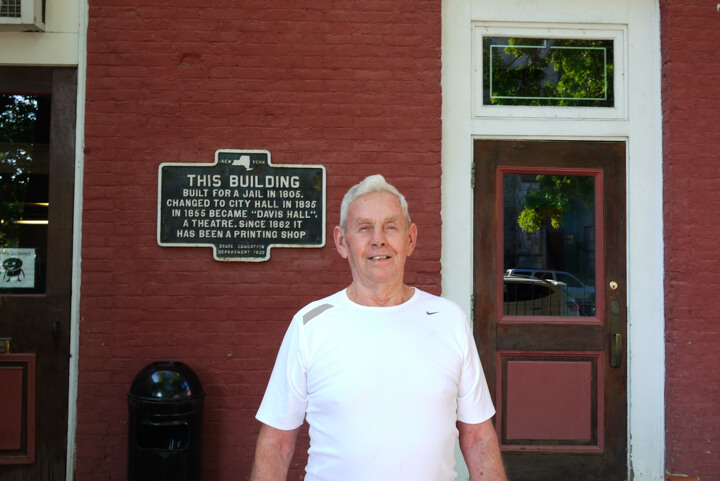 This interview with Albert Cook was conducted by Ben Lander at Cafe La Perche in Hudson, N.Y. on July 20th 2012. Al was born in Hudson in 1930 and has lived in the city for all but seven years of his life. This interview discusses parts of Al's early life in Hudson including his memories of Front St., the brothels on Diamond St., and diving for coins in the river as boats came in from New York City and elsewhere. Al worked in Hudson for his whole life and mentions his work at different places, including Atlas Cement where he became head of the union and once took his members out on strike for 102 days. Al also talks about raising a family in Hudson and gives his opinion on various subjects including local and national politics (including the fight against the Holcim Cement company), unions, gender, sexuality, race and marriage. Other topics that come up include drinking, gambling and retirement. Al records his thoughts on the effect of plant closures, about the future and his worries and hopes for future generations and for Hudson specifically. The second audio file was recorded after the original interview had ended and Al began talking about camping with his family, which he had not spoken about previously.

I am currently a professor of History and Social Science at Dawson College in Montreal. I was born in England and moved to Canada when I was eight. I was excited to come to Canada because I had thought it was barren wilderness where my family and I would build a log cabin and fend for ourselves, Swiss Family Robinson style. Although I was somewhat disappointed by the reality of suburban Nova Scotia, I nevertheless stuck to my fantasy and for almost a year would take an axe and chop down a tree most days after school and several on the weekend. I think, perhaps, this connects to my interest in oral history because, as a practice, it searches for the meanings and myths in people's lives, not facts that might constrain their understanding of self or the world. My interest in history and storytelling led me through many forms of media and various university degrees searching for documents where individual lives intersected with broader social, political and cultural events. Having completed Oral History Summer School, I am excited to have oral history as a new practice to introduce to my students and the stories of residents of Hudson to think about as I pursue my own work.