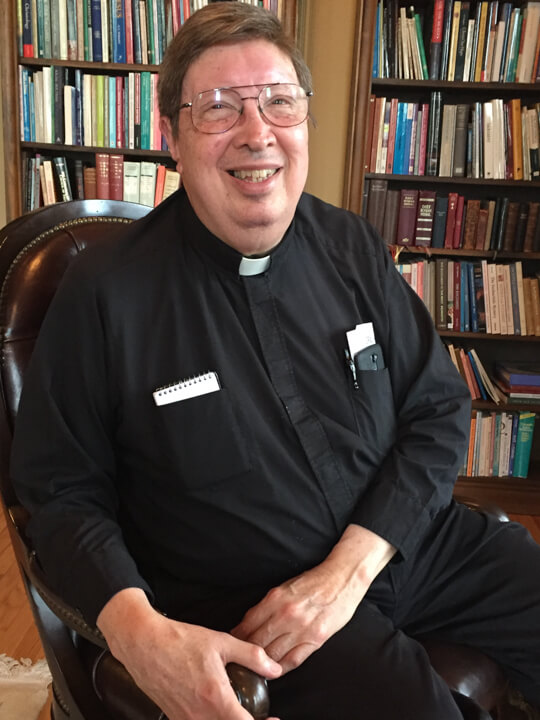 Born in 1941 in Marshall, Texas, Father Winston Bath is currently the pastor emeritus of Holy Trinity Parish on East Allen Street in Hudson, New York.  In his life-history interview, Father Bath divided his narrative into three segments.  Topics discussed in the first segment of the interview include the marriage between his Jewish father and Roman Catholic mother, his birth and his mother’s immediate postpartum death, his father’s second marriage to an English woman he met while serving in Great Britain during the Second World War, Father Bath’s relationships with his step-mother, half-sister and half-brother, his step-mother’s efforts to block contact with his mother’s family, and his high-school education in East Texas and his college education at Rensselaer Polytechnic Institute, where he initially planned to major in chemistry.  In the second segment of the interview, Father Bath focused on his discovery of Roman Catholicism and his formation as a priest, including his studies at the Seminary of Our Lady of Angels in Niagara Falls, New York and The Catholic University of America in Washington, D.C. in the institutional and theological turmoil immediately after the Second Vatican Council (1962-1965).  Father Bath concluded his interview by narrating his experiences as a priest in Albany, Troy, and Hudson, New York.  He included descriptions of hearing confessions in a prison, tensions within the Hudson Catholic community over the closing of Saint Mary’s Academy, a Catholic high school associated with Saint Mary Parish, and two rounds of parish closing and mergers conducted by the Roman Catholic Diocese of Albany, New York.

Father Bath’s narrative would be of interest to researchers interested in popular perceptions of religious congregations in East Texas during the 1960s, religious formation in the United States in the period immediately after the Second Vatican Council, structural and societal changes that influenced Catholic parish life in the period from 1972 to 2017 as well as personal narratives of religious conversion and priestly formation.

Chuck Kaczynski holds a doctorate in American religious and immigration history from The Catholic University in Washington, D.C.  His research interests include ethnic and racial tensions among both the laity and Roman Catholic clergy in the United States.  His essays and reviews have been published in Polish American Studies, The Polish Review, The 1930s: The Reality & The Promise, and People of Faith: Parishes and Religious Communities of the Diocese of Cleveland, a publication on which he also served as editor.