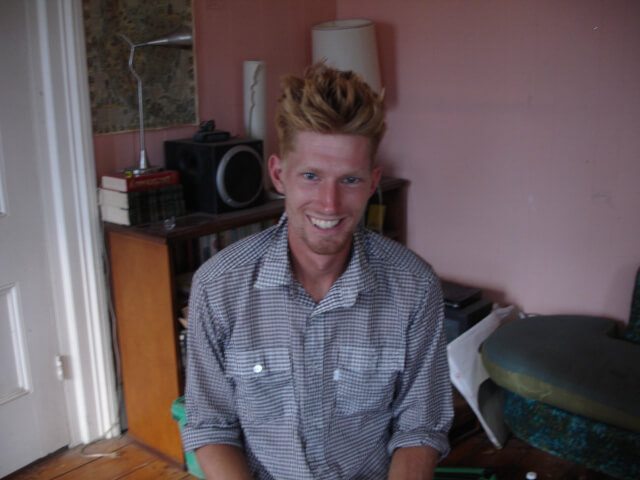 Trevor Roush, 22 grew up in Pine Planes N.Y. and attended Pine Planes High. Trevor speaks of his relationship with his brother and basketball as well as attending Columbia Green Community College after not being admitted to Marist Collage for plagiarizing a final paper. Growing up in an agricultural community Trevor discusses his only personal tie to agriculture as taking care of a calf for a required school project and not being good at it. Trevor speaks of his friends and interest in basketball and people with things in common to himself.

At 20, Trevor moved to the city of Hudson to “get a little urban” and admits “it was fun for a while but it wasn’t who I was” and moved to Ancramdale to manage a farm in May.
Inspired by movies and television he set out on a trip to San Pedro, Belize where Trevor speaks of thinking about Columbia County and his home.

While in Hudson Trevor speaks of new friends that have a common connection to Oberlin College that were introduced to him by an old school friend. At times, in Hudson, Trevor felt like an outsider around his new group of friends but continues to say he got to know people “outside his comfort zone.” Trevor discusses how he came to discover Germantown Community Farm and Kaya (Weidman) an important influence on him and first impressions of meeting new friends at the farm. Ashley Loehr and Ben Torpey are people Trevor met at the farm, attending parties, the importance of music and dance and feeling like an adopted son as well as the house having a feeling of a collective identity that’s constantly changing and maturing, are some topics discussed.

Trevor speaks of his food issues, the importance of socializing around meals at the farm and a personal exploration into new foods as well his fast friendship with Kaya and her role in the house as a “nice person to have as an ally”. When joining the CSA at GCF Trevor talks about the pickups and visits as a weekly highlight for him. Also discussed is the socializing and relationships to the people working on CSA’s and it feeling like a family. Trevor has worked for two years on a CSA in Ancramdale which is different from GCF as it is more focused on business and production and will be working with Ashley on a winter CSA.

Other topics discussed are the future sustainability of GCF, the personal conflict of being a CSA farmer vs. a CSA member, an open future in farming and the familial feelings of GCF. Trevor speaks about the importance of work in his life and idle time as lonely ,the love of farming and Columbia County, the future of preserving local farms, being priced out of owning land and land lease options and finally says the future of GCF is open ended and “it will continue to be an awesome place”.

I’m a native NewYorker that has been involved in the Antiques business for the past thirty years. I began as a private dealer specializing in 19th century American furniture then opening a retail space in Hudson from 1995-2001 after closing the store I worked at Stair Galleries in Hudson for three years. I am now back to private dealing working with museums, collectors along with some wholesale trade. I look forward to producing and directing an independent documentary film and am interested in the skills needed for the interview process.