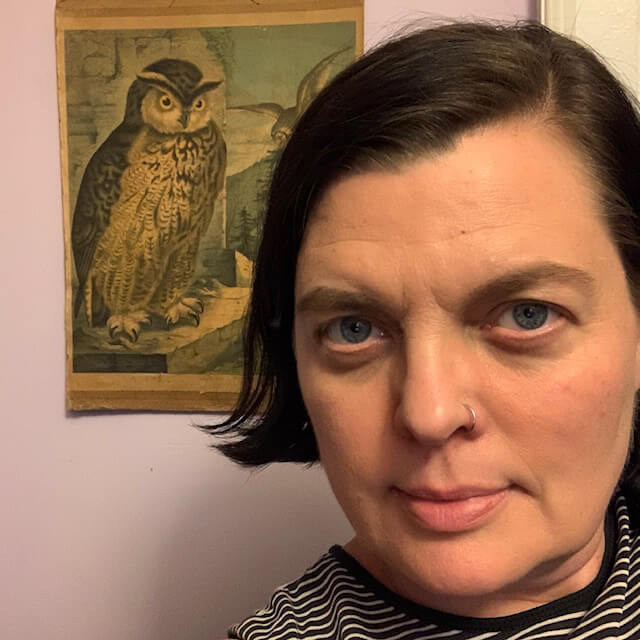 This interview with Sarah Falkner was conducted on June 22, 2018 at her office in Hudson, NY. Raised in Bloomington, Indiana, Sarah moved to Hudson via New York City in 2009. Sarah is a healer, an artist, a writer, and an independent radio producer. In the interview, she discusses growing up in Bloomington, including her working class background and the prevalence of trauma and chronic illness in her family history. She describes her move to New York City, getting involved with some collectives, and becoming disenchanted with it, in part due to the general lack of ecological awareness. She reflects on the reactions to her enrollment in massage school, and discusses misconceptions around massage that she has encountered, including that it is a form of sex work (which she also regards as important work) and that it is not intellectual. She also describes not fitting herself into certain expectations of how a healer should look or act. Sarah reflects further upon her work in the healing arts in Hudson, touching on boundaries between clients and healing workers, class assumptions and access, and her experience working in the realm of Traditional Tibetan medicine. She also cites the huge impact that being diagnosed with Lyme Disease has had on her ability to work as a healer, to be involved in community organizing, and to write.

This interview may be of interest to those who want to learn about healing arts in Hudson, Lyme Disease, working class experience, massage, trauma, sexuality and gender, Traditional Tibetan medicine, collectives, New York City in the early to mid-2000s, Indiana in the late 20th century.

Jaime Shearn Coan. b. 1980, is a writer and cultural worker originally from Providence, RI. He moved to Brooklyn, New York from San Francisco in 2005, and is entering his last year as a doctoral candidate at The Graduate Center at the City University of New York, where he writes about intersections of live performance, race, sexuality, and HIV/AIDS in New York City in the 1980s-1990s.