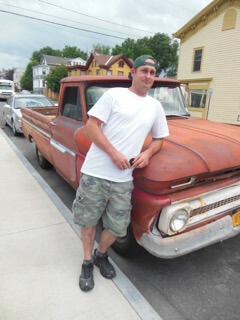 Rich Bauer was born in Rhinebeck, New York, but has lived in Hudson since he was a teen. Rich and I spoke at the Hudson Library in the large Senior Center room. He owns a successful contracting and handyman business in Hudson. He spoke positively about the changes in Hudson that he has seen in the last two decades, not only because his business in maintaining and restoring homes in the area is thriving, but also because he cares about the community and sees the changes as re-vitalizing the city. He spoke about his enthusiasm for the re-purposing of old factories in town. Rich shared personal information about growing up in a family that moved often with a mostly absent father, and the effect that had on his self-esteem. He spoke about his twenty-plus year estrangement from his father. In spite of a brief stint as a troubled teen, Rich has been dedicated to not repeating the mistakes of his own father while raising his daughter, who is now a teenager, by active co-parenting with the mother. He spoke about a turning point where he and his friends were arrested for breaking into the armory, the building that is now the library, and searching for a mythical army tank. The police officer who arrested him is one of the people he credits with his turn away from the more troubled paths of most of his friends. He also credits his mother, his boss at the steel mill, and others he didn’t name. Rich is one of the only people that he grew up with who hasn’t been incarcerated. He has a love for history, historic buildings, and his 1966 classic Chevy pickup truck.

Kara Westerman is a writer, teacher, oral history facilitator, and podcaster based in East Hampton, New York. Her short fiction has been published in many places. Her main love is her podcast which tells the untold stories of residents on the eastern end of Long Island, known as The Hamptons, Phantom Hampton: Stories From Where The Rest Of Us Live. She is currently writing feature articles for The East End Beacon newspaper, incorporating her recorded podcasts in her articles, and her articles in her recorded podcasts.