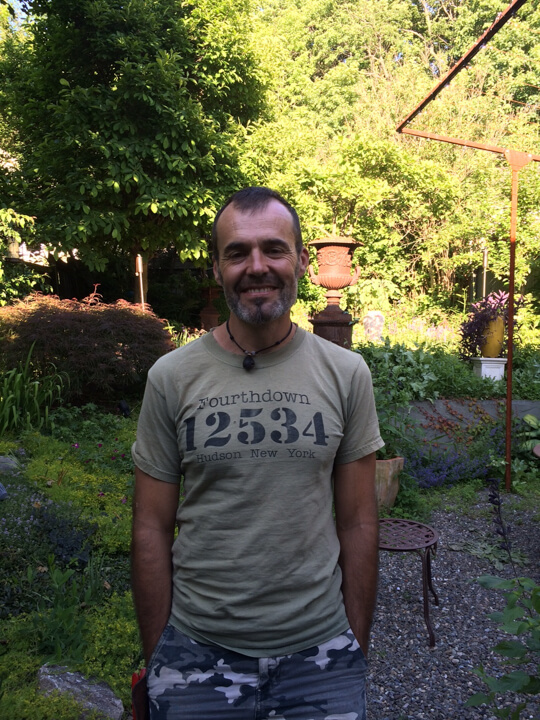 The interview with Philippe Soule was recorded in his kitchen on Worth Avenue in the late afternoon of June 19, 2014.  He began by speaking of his youth as a French expatriate in Mozambique, Sudan and Saudi Arabia, where life was spent in isolated international compounds. He attended boarding school in France and was later accepted to an international MBA program that brought him to New York City.  It was there in the East Village that he first experienced the freedom to live openly as a gay man. And it was there that he felt his world begin to open. The new freedoms were in contrast to the relatively strict societal morays of his upbringing.  He started a French antique import business with his mother who also became enchanted with New York and its sense of possibilities.

It was the antiques business that brought Philippe to Hudson in 2004, combined with the wariness of the busy city.  He felt then that Hudson was a small, inclusive, and easily affordable community with many ex-New Yorkers like himself.  He feels now that the town is changing with the influx of wealthy young people arriving, driving up housing costs while not necessarily engaging in the larger community.

Today Philippe runs a successful landscape business in Hudson. He loves the ability the business affords him to make time for international travel and to spend winters and some weekends in Montreal. His spirituality is evident and is reflected in his daily perspective, to live in the present and accept that there are no mistakes or chance encounters.

Barkey Powell conducted this interview while a student with the Oral History Summer School in Hudson. She lives in New Canaan, Ct with her husband where they raised four boys to men. She plans to pursue her love of collecting stories and preserving voices in combination with her lifelong interests in photography, journalism, travel, design, and literature.