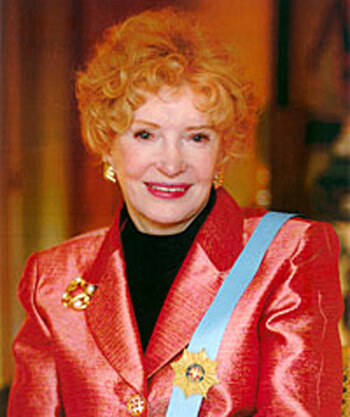 Pat Naggiar is an 86 year old woman living in Hudson, born in Yorkshire England. Pat recalls attending school and living in a convent from age 5-17.

During the WWII evacuation of England Pat went to live on a 2000 acre farm owned by the local Lord and tells of adopting a piglet. At age 17 she began working a repertory group near London in the prop department and was subsequently fired and how that moment was important to her stating “I think everybody should be fired once.”

Pat attended college at Guild Hall School of Music and Drama. At the age of 18 Pat was called up for National Service and went for one year to the Middle East doing productions of Richard II with John Gielgud, traveled to Baghdad, Damascus, Tobruk and Tripoli. Pat then went to Cairo and me her future husband Ray, she then returned to England and Guild Hall. Ray, on a visit to England, married Pat, then moved to Italy and began a Biscuit company which failed and then they both moved to Cairo. In Cairo Pat, taught English for two years then stumbled through teaching Science. As King Farouke was thrown out and NASA came to Egypt Pat speaks of living through a dangerous time.

Pat and her husband moved to Manhattan and lived at the Empire Hotel when money was tight. Her husband got a job at a shipping company in the insurance department and speaks of how difficult that was for him. Pat talked her way into a job at Time Magazine and of avoiding a secretarial position because she stated she did not type.

After getting pregnant Pat organized some day care in her building with other mothers with young children. Pat then got a job at CBS as a production assistant using her credentials from Time Magazine. Not satisfied with the role as production assistant Pat pitched ideas for film segments and got the production assignments dealing with unpopular subjects. After a few years at CBS Pat got a job at a German Television Station and had the freedom to choose her own stories. She disucsses some of her big projects and interviews.

Pat briefly tells of how she and her husband Ray came to Columbia county, moving into Hudson, her friends and social life.

I’m a native NewYorker that has been involved in the Antiques business for the past thirty years.I began as a private dealer specializing in 19th century American furniture then opening a retail space in Hudson from 1995-2001 after closing the store I worked at Stair Galleries in Hudson for three years. I am now back to private dealing working with museums, collectors along with some wholesale trade. I look forward to producing and directing an independent documentary film and am interested in the skills needed for the interview process.