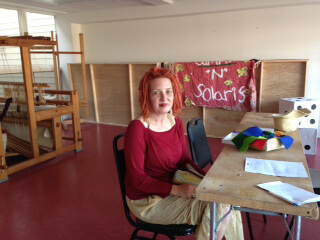 This interview was recorded at 360 Warren St in Hudson. In it Melora talks about growing up in Emporia, Kansas. The adopted child of artistic parents, she grew up pre-Internet and studied music (se played the cello) from a young age. At 18 she moved to New York City to attend art school. She spent some 20 years in NYC, studying first art and then photography and eventually dropping out of college to pursue a career as a rock musician.  In describing her life in NYC she talks about her drag queen friends, working for jewellery company Erikson Beaman and being a musician, including a first experience of record-making with band Ultra Vivid Scene, signed to British label 4AD.

For the past nine years she has been living in Columbia County. She has two daughters and in the course of the interview speaks in particular about her older daughter, a teenager, and their relationship.

She also speaks about being in Hudson and spending time at Bliss Towers (‘the projects’) and her view of Hudson as a segregated place, unlike Troy where she lives.

Other topics discussed include feeling a misfit as a child, peer pressure, the financial and other struggles of being a professional musician, her difficult relationship with her ex-husband and their custody battle over their daughter, climate change and its likely effects

Some clarifications in case of confusion: Melora was born in Kansas City MO and grew up in Emporia, Kansas. She has bright red dreadlocks. Iris is the name of her poodle. Also, at the time of the interview she was wearing rings which sometimes clicked together when she moved her hands