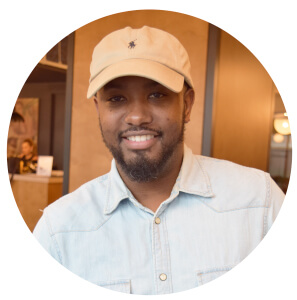 This interview was with Kamal Johnson, conducted on June 21, 2018 in Hudson, NY.   Kamal was born and raised in Hudson, NY, where he recounts his school days, personal and family challenges, involvement with community work to help youth, and now serves in a leadership role in the Hudson Promise Neighborhood Initiative and as an alderman in a ward in Hudson.

Kamal discusses his Childhood in Hudson, which included the death of his father when he was just four years old, living in a trauma-impacted community, and being abandoned by his mother, who is in recovery from drug addiction.  He also talks about how he is the only one of his brothers who is not incarcerated.   Kamal remembers the mentors that began to emerge in his life, who helped him begin his journey of self-discovery of his own talents and abilities.  Kamal also recounts his local political campaign in which he was elected in a ward with 5 % minority population, while he himself is African-American.  He also discusses the support he received during his campaign from a key funder and supporter, and the advocacy work that he continues to do, while he still serves as alderman.

This interview may be of interest to those who are interested in public health, equity in the educational system in Hudson, youth development, community engagement and organizing, resiliency, adverse Childhood experiences, and mentorship.