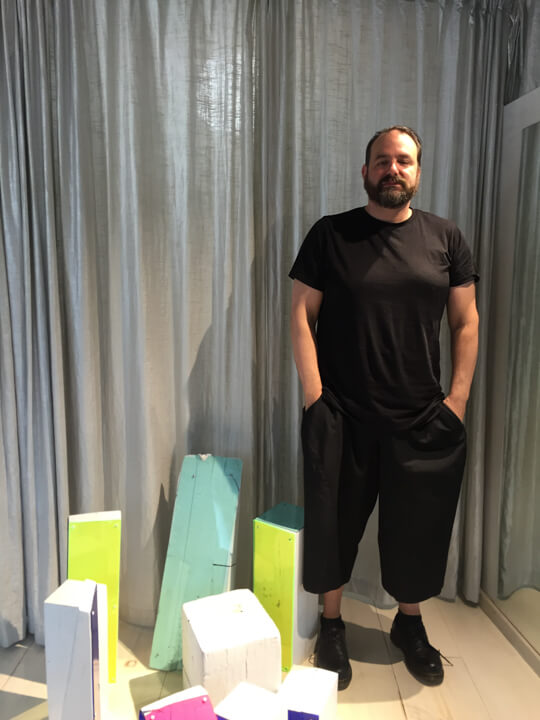 Jonathan Osofsky is the director of a high-end fashion store on Warren Street specializing in avant-garde clothes. Jonathan grew up on a farm in Ancramdale, about thirty minutes from Hudson, which he remembered visiting with his grandmother, and seeing stores on Warren Street largely boarded up. He was always quite creative, and loved to draw. As he got older, his interests — New Wave music, Andy Warhol, British culture — made him feel apart from many in his community. He went to film school at SUNY Purchase but dropped out, which he attributes partly to obsessive-compulsive disorder.

Jonathan moved to New York in the early 90s, and became involved in the club scene, and became involved in the arts community. He also began using drugs, and eventually went to rehab. In the early 2000s, he returned to get his degree at Bard.  While there, he moved to Hudson, which he saw at first as a type of utopia, with a number of different communities — black, white, gay, straight, affluent, poor — mixing socially. But there were also tensions from the complicated systems of gentrification.  He recognizes his uncomfortable place in the process, and as a gay man who also grew up in the Columbia County, saw both local homophobia as well as classism and racism from the new affluent arrivals. He is active in the local social justice movement.

In addition to the specifics of the life history mentioned above, this interview would be of interest to anyone interested in perspectives on gentrification from a long-time resident who can see both the issues and history from multiple, personal vantage points.

Mike Stabile is a Los Angeles-based documentary filmmaker and journalist with a focus on issues of obscenity, sex work, and LGBT history. He was born in 1974 in New Jersey, and was raised on an Old West-themed amusement park owned by his family. He graduated from Wesleyan University, and later lived in New York, San Francisco, and Buenos Aires.