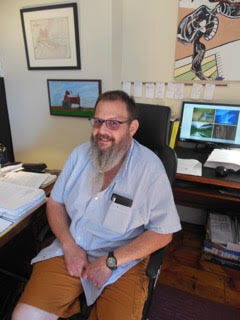 I interviewed John at his law office at 230 Warren Street in Hudson. He was dressed casually in shorts, and had his beard in a ponytail with a bead. John spent his undergrad years in Albany and went to Law School at Cardoza in Manhattan. Turning point: after a stint in the telecom business his job as CEO threatened to take over his life and his wife gave him an ultimatum. He chose his wife. John and his wife moved to Hudson nine years ago. John practices mostly transactional law for farmers, restaurants, food growers in the area, and accepts many forms of payment including but not limited to pigs, goats, and bread. Worldview: he talked about valuing people over money many times, the importance of community and neighbors. He and his wife love living in Hudson, but are worried about the future of the city. John spoke about diversity as being the most important aspect of keeping a thriving city. John is on the Hudson City Council, which he was very vocal about mostly disdaining because of their lack of action on many issues. The main two issues facing Hudson he feels are making sure that chain stores don’t take over Warren Street, and making sure affordable housing is maintained so that the community in not only composed of the hime middle, and upper classes. He spoke about the failure of the school system for lower income kids. John started a summer series of talks for high school kids from professionals in all fields.

Kara Westerman is a writer, teacher, oral history facilitator, and podcaster based in East Hampton, New York. Her short fiction has been published in many places. Her main love is her podcast which tells the untold stories of residents on the eastern end of Long Island, known as The Hamptons, Phantom Hampton: Stories From Where The Rest Of Us Live. She is currently writing feature articles for The East End Beacon newspaper, incorporating her recorded podcasts in her articles, and her articles in her recorded podcasts.