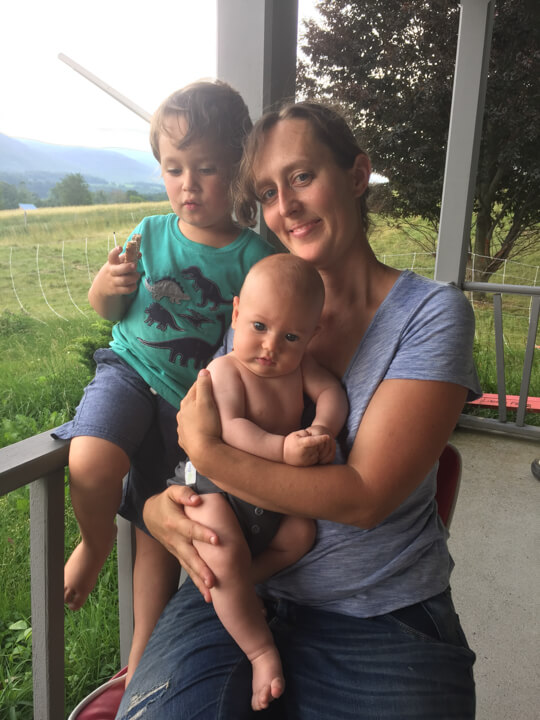 This interview with Jen Ronsani was conducted at her home at Lineage Farm in Copake, NY, on July 1, 2017. In this interview Jen discusses how she came to New York State from her Childhood home in Marietta, GA, to attend Vassar College in Poughkeepsie, NY, where she studied Italian. Her early experiences with farming began in college, leading to later jobs including at a farm on the Rokeby estate in Red Hook, NY, where much of her knowledge about sustainable farming practices was established. She met her husband, Jon, working at Hawthorne Valley Farm in Columbia County, where she first learned about biodynamic agriculture. Although the two began their independent farming careers separately, she explains how she eventually joined Jon at Lineage Farm so they could begin a family. Throughout the interview, Ronsani expresses the values by which she abides, many of which were established in her early farming career as well as those she has formed since becoming a mother and pursuing a new path in teaching. She also explains how these values inform and inspire hers and Jon’s work with Good Food for Hudson, a program they founded to provide fresh produce to low-income families in the city of Hudson.

This interview may be of interest to someone curious about sustainable, organic, and biodynamic agricultural practices; food systems and farming in the Hudson Valley; career development and adaptation; values pertaining to family and motherhood; as well as, food advocacy and accessibility to fresh food in Hudson, NY.

Gretta Tritch Roman is an architectural and urban historian who teaches at Bard College. She is the Digital Projects Coordinator for the Experimental Humanities initiative and started the Digital History Lab, which focuses on connecting Bard students with their neighboring communities through a shared interest in local history. Central to her research is an interest in food systems and agriculture as they impact and shape urban environments.