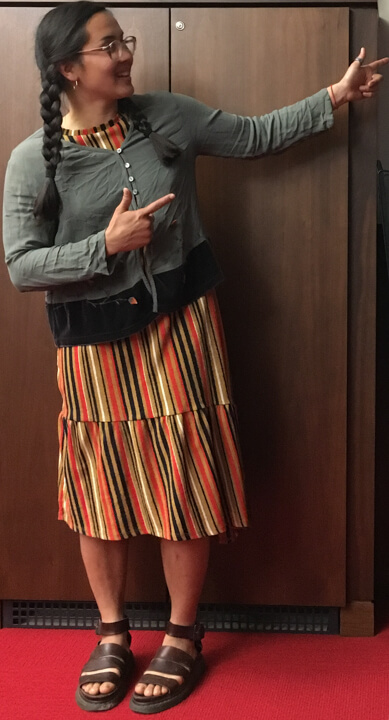 Heylan Tsumagari grew up in Red Hook, New York, in neighboring Dutchess County. After college in New York City, she moved to Hillsdale, New York, to farm. She has worked for more than one farm in the area, including Hawthorne Valley Farm, and for other organizations involved in agriculture and food, including Long Table Harvest. Tsumagari currently works with Kite’s Nest and is studying to become a nurse midwife. During the interview, she spoke about the train tracks near her house growing up, mentioned how much time she spent outside in her youth, and referenced her parents’ backgrounds, coming from the Netherlands and rural Japan. Tsumagari spoke about having other children to go on adventures with because of shared housing, the connection her siblings have to the area, and the places in Hudson and Red Hook which are part of her day and where she finds community.

Alice Fairbank Goldfarb grew up an hour north of Hudson, and at the time of the interview was about transition between cities of the mid Atlantic. She came to the interview with great curiosity about the community, given that her knowledge of the area consisted largely of the names of venues which underwrite on Northeast Public Radio.