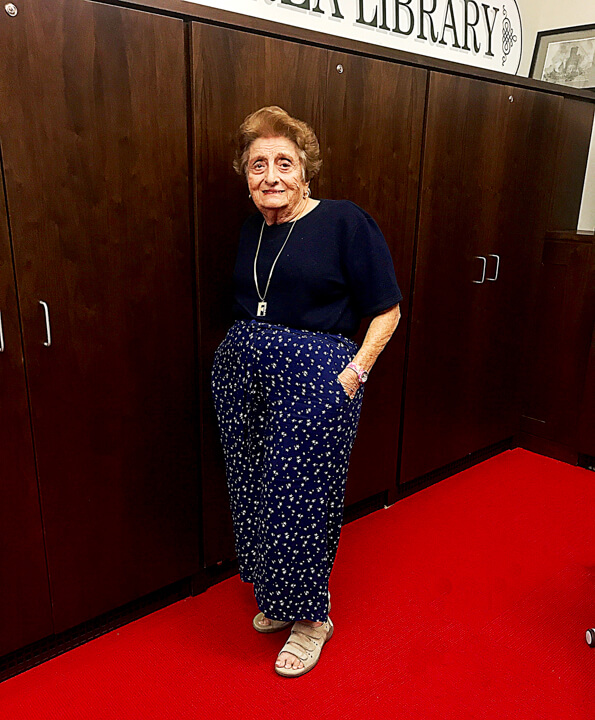 Frances Feldman (née Finkelstein) is 86 years old and splits her time between Lenox, MA and the state of Florida. She was born on May 22, 1932 and raised in Hudson, N.Y, where her family once owned multiple properties and a clothing and home goods store. In this interview, she navigates memories from her Childhood, sharing glimpses of family life and cultural dynamics within the Hudson community. Her stories invite the listener to explore the history of Hudson’s small Jewish community, dynamics between shop-owners and customers, civilian engagement with government programs and the presence of sex work within the city. Delving into her later life, Frances talks about meeting and marrying her husband, pursuing a career as a social worker and even her love of tarot card readings. A primary thread running through Frances’ narrative is a commitment to hard work and independence, which she attributes to a Childhood spent working in the family business under the guidance of her mother and father. Frances currently works in hospice care and volunteers regularly in both of the places that she lives. She discusses her philosophies on death and dying and contributes her opinion of the current state of healthcare, politics and culture.

This interview might be of interest to anyone looking to explore themes of Hudson, NY in the 20th century; the Leader store in Hudson, N.Y.; history of buildings and property ownership on Warren Street in Hudson; the Allen Street school in Hudson; Hudson High School; race and race relations in Hudson; the Department of Labor and child labor laws as applied in Hudson; civilian engagement with the National Jewish Welfare Board; kosher Jewish living in Hudson and surrounding areas; government programs of the 1940’s and how they affected life in upstate New York; graduates of Bachelor programs at Syracuse university in the 1950’s; the lives of shop owners in Hudson and Peekskill, N.Y.; hospice and end of life care; volunteerism in the elderly community in 2018; political and cultural response of elderly women to a 2017 Donald Trump presidential victory; the life and family of Abraham and Anna Finkelstein; female presidents of synagogues; pursuit of a Master’s degree in social work in the 1980’s; social work in New York State.

Samantha Gloffke was born in May of 1987 in Queens, N.Y. She is an owner and manager of The Applestone Meat Co., which aims to increase accessibility and affordability of ethically raised meat in the Hudson Valley region of New York. She is a volunteer board member of The Restorative Center in Newburgh, N.Y., which works to create alternatives to the criminal justice system. Her interests include painting, self-publishing, oral history and inspired community gathering.