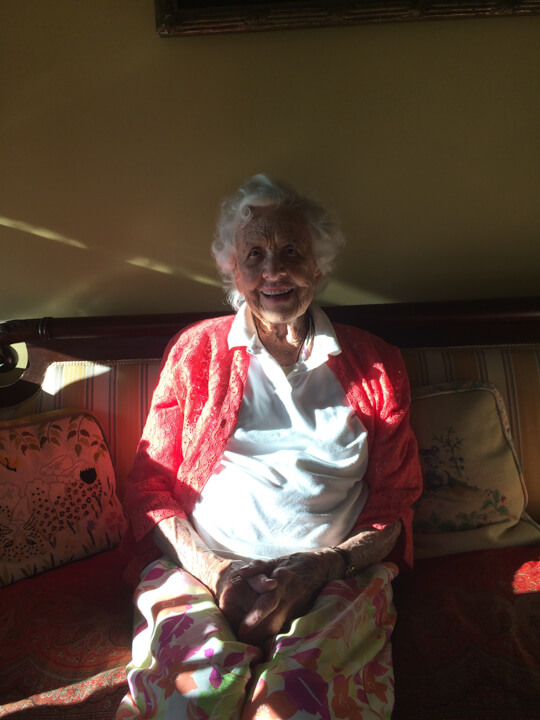 Esther was married in 1940, she has 3 children. They lived in NYC and spent the summers in Kinderhook, NY so that Esther could have a horses. They lived in a 1800s farmhouse, with no electricity, no telephone until Rural Electrification brought about by FDR. The house still stands and is owned by her family to this day. The previous tenants were Jesse Merwin and apparently Ichabod Crane. Washington Irving used to walk over and one day told Jesse Merwin a story about Ichabod crane chasing him and that this was the story that became the Legend of Sleepy hollow. Jesse Merwin’s tombstone was Esther’s front doorstep and she was told that if she moved the tombstone that the headless horseman would “ride again”. One day, 75 years ago, she turned it over to read it and then put it back. That night, lightening from a thunderstorm destroyed a large maple tree in her yard.

They lived there for “75 summers”. Her mother in law stayed with them and taught the children about birds and flowers. During the war she would drive the horses in to town to go to the market because gas was rationed at about 6 gallons a week. Hudson had the best market and she had to drive to Hudson every Friday to pick her husband up at the train station anyway. The train would get in at 8 so they would take the ferry Hudson to Athens while waiting for dad.

Esther’s family was from MA and were in the shipping business. When clipper ships came in they were too long to turn around in the small Boston harbor so in 1840 they all moved to NYC. Esther describes her grandfathers family and that her mother was raised in Brooklyn heights. Her father died when she was 8 and mother died of diabetes a few years later. An aunt and uncle sent them to boarding school.

Esther became the Chairmen of Brookyn Botanical Garden, worked on school boards, and was in charge of the Girl Scouts. She tells an amusing story from the Girl Scout Days.

I spent my Childhood in Upstate NY and my formative years in a college town in the Deep South. After graduating from Auburn University with a degree in Political Science and Spanish I decided it was time to leave the south to seek inspiration and opportunity. Since then, I have worked as an AmeriCorps VISTA, a production assistant for film and photography, a documentary film researcher and transcriber, an archive assistant, and recently have moved to New York City, a life-long goal. As of May 10, 2014, I have managed to narrow down my interests to these: media arts, research, documentary journalism, oral history, archival media, anthropology and sociology, gender and racial equality, mortality and spirituality. My plan for the future involves graduate work in Liberal Arts and continued study of media arts as a form of self-expression and social change.