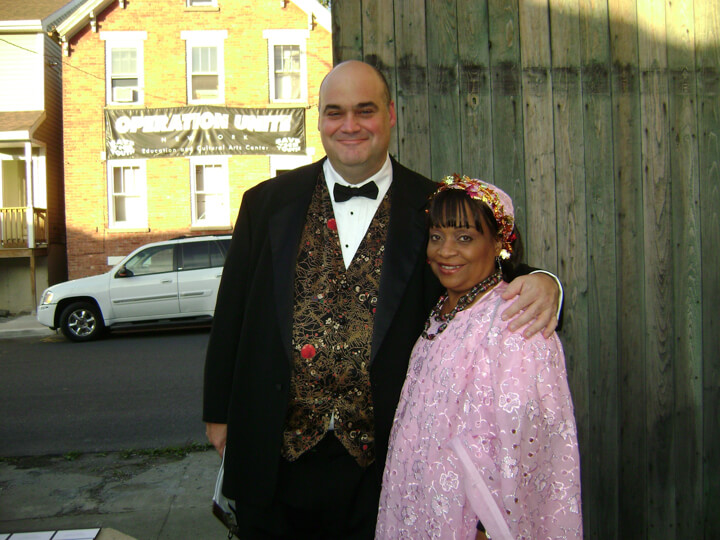 This life history interview with Elena Mosley was conducted in Hudson, New York on July 19th and July 23rd 2012 through the Oral History Summer School.  The audio includes a descriptive narrative of early girlhood growing up within “all the boroughs of New York” including a period of time during the Bronx fires and her family’s move to Staten Island.

Elena discusses her relocation to the town of Claverack/ Columbia County in 1979 with her husband, Greg Mosley, who was employed by the New York State Police: (“this set the place for where our permanent family would be”).  She remembers this experience as a time “where there was evidence of racism, prejudice… comments going on here as we were the only Black person and family in Claverack at that time” and the ways in which this landscape influenced her choices to expose her children to a wider African American community, (i.e. driving into Hudson to take her children to the public library every week and participation in programs that would “shape, expose, and strengthen…it was the best of two worlds.”)

She attended NYU with a degree in nursing and discusses her employment experiences while working at Green County Hospital (merged with Columbia Hospital) in OB/GYN  and later a full time position within long term care nursing at the New York Fireman’s Home. Elena describes the following: “The Fireman’s Home opened my eyes to things about the county I was living in and the people. Being a head nurse and an African American…I didn’t know how important that was. We were at an annual board dinner and a board member turned and asked me how long had I been in housekeeping. One lady ahead of us in housekeeping heard him, she was insulted…like that’s our head nurse.  It was an assumption that this was all that Black people did and was reflective of our town and the kinds of jobs people were in. That I will never forget.”  Elena also viewed the work environment as being family orientated and a “place that appreciated the family, I was very happy there and found it an interesting place to work.”

Elena is the founder and director of Operation Unite, an educational and cultural arts center located at 360 Columbia Street in Hudson. The program began as a “storefront center” for youth on Warren Street prior to the entrance of the antique industry and later the gradual gentrification of a “downtown area which was like a ghost town with fifty percent of the stores empty” which she discusses in detail. She describes the early planning process of the program and the later transitions within the context of Hudson’s multiple transformations, (“space was becoming obsolete as there was a downtown, uptown, and then below 4th street was where Black people lived called downstreet”). Operation Unite evolved during a time of “big life changes that opened my eyes as my mother had died of lung cancer, my middle son is autistic and I was researching schools to place him for his education, and I was later diagnosed with breast cancer.” When asked about current programming through Operation Unite, Elena discusses her recent trip to Palissa, Uganda which she and five of her students returned from earlier in this month.

As Elena was active in forming Palissa as a Hudson Sister City along with collaboration of several other community members which began this process in 2006, she describes her experiences both individually and that of the youth Exchange students: “the teenagers were wonderful and were present for all of the meetings: we focused on literacy and took arts and crafts things to do that we had purchased for the Uganda schools, we added two orphanages that was not in the itinerary but we fit it in too as there were eighteen children that the students went in to play games with.”  Further subjects included a description of
the hospital and the introduction of solar ovens for cooking. Elena described the hospital conditions as “horrible, there were no supplies and the operating room had nothing on the walls- just a 40 watt light, no generator, and a bulb on the syringe was broken and I thought…where are we?” The belief and value of “ordinary people making a difference in the lives of so many” was frequently expressed by Elena during the interview.

She was also a significant key figure in the restoration of the Hudson Opera House in 1992 which she described as “an event changing era” and continues to remain actively involved as a member of the board.  Elena discusses the development of numerous projects in depth and speaks of the importance that family, community, education and the cultural arts hold with emphasis on exposure, involvement and opportunities for youth. Further impressions reflect her extensive involvement in the Council for the Arts, NAACP, the Black Arts Cultural Festival, and the Girls and Boys Club.  Inclusion and integration of “more minorities in the Art’s events in Hudson” was also highlighted during the interview.

Primary subjects spoken during the interview include the influence and choices made through secure family connection, an extensive professional career as a dancer, teacher, and nurse. Early Childhood places are described in depth: “I remember when I was very young a time when buildings were being burned where we lived in the South Bronx, it was a terrible thing in the community…someone’s idea of getting rid of blight but it was more about civil unrest, social issues, underserved neighborhoods.  I came home one night in my big party dress and my aunt was watching out for me and someone had done the fire thing because the house next door was mine… that was my exit from the Bronx.” She credits her mother for many things: ‘my mother was moving around to keep protecting her children” while always encouraging involvement to free public programs which exposed Elena and her siblings to cultural arts learning. Her mother also placed education in the forefront for Elena, (i.e. “either work or get an education or get out was her mantra.”)

Pivotal experiences for Elena also reflect the importance of mentors and music: “when I was six years old I used to go to African dance class on Saturday mornings and the teacher used a record album and I still know every song on that album…it was my first introduction to African dance music and later Spanish dance” (i.e. she stressed the music of Olatunji Babatunde’s album “Drums of Passion”).

Themes and emphasis on the key role of education and family within her life and that of her three children were also discussed over the course of the interview including the experience of “the life of an Autistic family.” Elena concludes the interview with a beautifully detailed conversation regarding the “passing of  A. Badilla who was an father, husband, and artist” whose death was honored by both the family and Hudson community.  “Something unique happened for Hudson: over two hundred people gathered to walk in a procession down Warren Street to the river. They put his casket on a flatbed and the coffin that was painted and decorated on all four sides reflective of his art work…it was absolutely beautiful. His children were placed around him drumming. The picture of community was phenomenal: diverse, age, ethnicity…thirty two years ago I would never dreamed of this happening.”