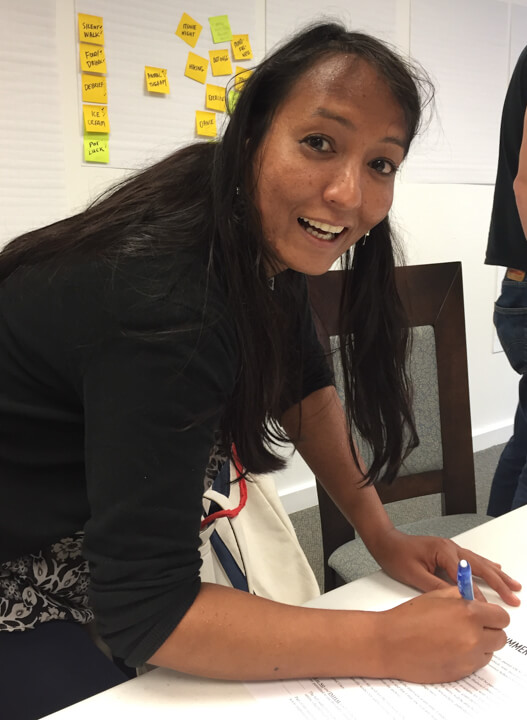 This interview with Dhana Hamal was conducted on June 21, 2018 at Drop Forge & Tool in Hudson, NY. In the interview, Dhana discusses moving from her home in a rural village in a mountainous region in Nepal, to Hudson, NY in 2008, where her host family resides. She describes taking an ESL summer course in Albany, and consequently getting accepted into Bard College. She contrasts educational styles in the US and Nepal, including the role that gender plays in accessing education, and describes the unique challenges of being an international student at Bard. She reflects on the influence that her mother had on her growing up, specifically how she challenged patriarchal structures and norms in Nepal, and her grief in losing her to cancer a year before graduating college. Dhana narrates her experience of becoming critically ill while studying in Toronto, and consequently stepping into the public health spotlight to speak out about loopholes in insurance policy, which resulted in changes being made to policies. She describes the work she has done that her mother would be most proud of, including her experience in Toronto, and working with trafficking victims in Nepal.

This interview may be of interest to those who want to learn about life and education in rural Nepal, especially as impacted by gender, higher education as an international student, healthcare, public health policy, trafficking, Bard College, illness, grief, and activism.

Jaime Shearn Coan. b. 1980, is a writer and cultural worker originally from Providence, RI. He moved to Brooklyn, New York from San Francisco in 2005, and is entering his last year as a doctoral candidate at The Graduate Center at the City University of New York, where he writes about intersections of live performance, race, sexuality, and HIV/AIDS in New York City in the 1980s-1990s.