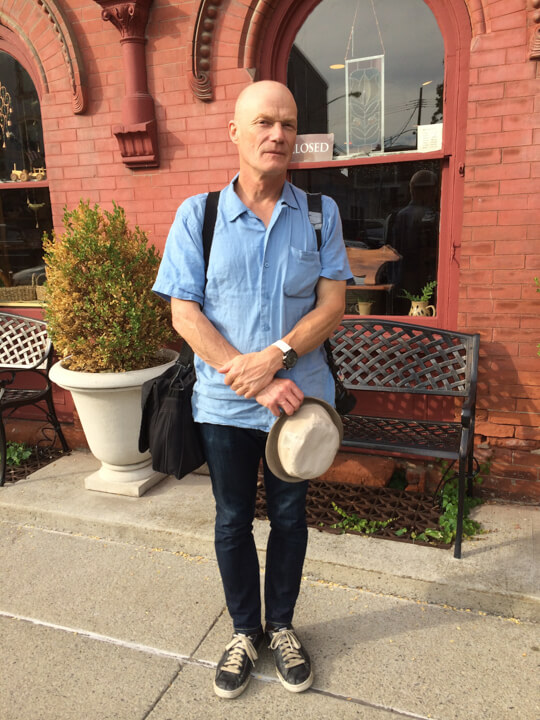 David Lee, photographer for the local newspaper, shared his life history at the public library in Hudson, NY on June 18, 2014. David grew up in Glenwood, MN, a small, rural Minnesota town. It was post WWII, baby boomer era, and he said his Childhood was a “cliché, idyllic, 50’s, American Childhood”. His family adopted his African American sister in 1963 or 1964. He described his ancestral tree, i.e. name origins (Norway, Sweden), occupations (Agricultural), land settlement (Illinois).

The majority of his family were farmers living in a small tight knit, self sustaining community. His father, the community doctor, went to school on the GI Bill. For about 8 years he was the only doctor in the entire county. He was on call constantly and he drank after work. After his retirement he died of congestive heart failure and David blames the stress of his father’s work. . His mother was an alcoholic but has been sober for about 35 years now. His father was a “very cultured person” and this influenced David to pursue a degree in liberal arts from the University of Minnesota. He studied drawing and painting and thought he would be an artist, more specifically, a painter a part of the abstract expressionist movement. He thinks everybody should feel the intensity of “being a true believer”. When he needed to make money he had many jobs including the Walker Arts Center. He felt he needed to have a more professional job so he went back to school to study art history and museology. From there he moved to NYC to be an Editorial Intern at Aperture Foundation. There he met his future wife, a production intern. During the late 80s and early 90s he worked as an art handler in various galleries and came in contact with and worked with many important artists. He described at length part of the installation process of an Anselm Kiefer exhibition at the Marian Goodman gallery during which his daughter was born. They bought a house in Columbia County in 1989. He had many temporary jobs including delivering phone books, which allowed him to be a site see-er and to eventually find a job with George Rickey.

After 5 years he started working as a photographer for the Independent and by 2003 replaced BJ Pendergast as the full time photographer. He described the experience of using film in a deadline driven environment. He ends the interview sharing his views on the value of ‘community’ as the foundation of society and that growing up his grandparents and parents lived in a community where people supported each other and spent valuable time together even though they had different political views. David is reminded of a controversial float at the Flag Day parade from a few days earlier. As the community photographer he observes the community events as “ritual” and “tribal”. He identifies with being the “watcher” and observer “without directing”. He teaches his photography students that dichotomy, that the photography is an expression, an editing process, but also ideally that the photographer is a fly on the wall. His work with the Independent has allowed him to be part of the community/tribe.

I spent my Childhood in Upstate NY and my formative years in a college town in the Deep South. After graduating from Auburn University with a degree in Political Science and Spanish I decided it was time to leave the south to seek inspiration and opportunity. Since then, I have worked as an AmeriCorps VISTA, a production assistant for film and photography, a documentary film researcher and transcriber, an archive assistant, and recently have moved to New York City, a life-long goal. As of May 10, 2014, I have managed to narrow down my interests to these: media arts, research, documentary journalism, oral history, archival media, anthropology and sociology, gender and racial equality, mortality and spirituality. My plan for the future involves graduate work in Liberal Arts and continued study of media arts as a form of self-expression and social change.