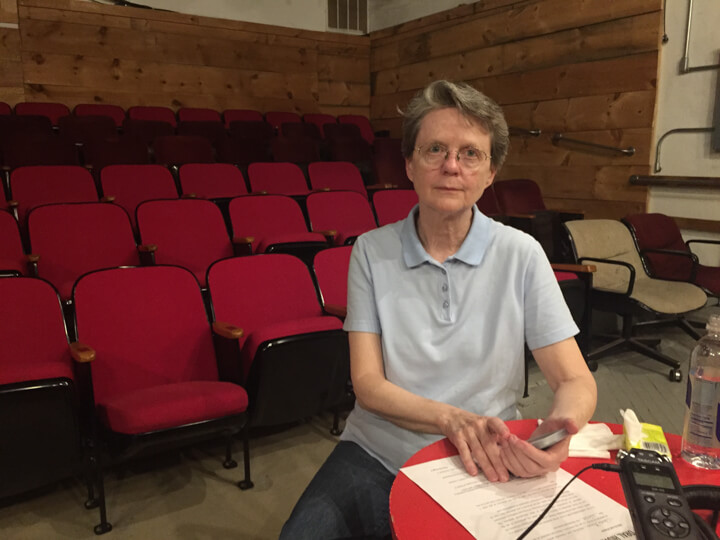 This interview with Claudia Bruce was conducted on June 27th 2016 at Time and Space Limited in Hudson, New York, also referred to as TSL. In the interview Claudia discusses growing up in Tupelo, Mississippi and then her early life in Cornelia, Georgia in the 1940’s. She speaks of her mother who attended Mississippi State Women’s College and her father who worked in textiles as well as her early memories of her grandparents and friends. She briefly discusses her brother who was a soldier in the Vietnam War and who she still visits on the train to the American South. She reflects on her decision to study theater at an all women’s college in Atlanta, a year she spent in Paris, a year she spent in Washington D.C., and her early experiences as a performer both singing and acting. She moved to New York City to be a part of the emerging theater scenes there, performing in a range of productions. She lived in the Lower East Side where she worked at The Majority Report women’s movement paper. She met Linda Mussman, who she moved in with and eventually moved upstate with. Claudia became the co-director of Time and Space Limited, an arts space Linda founded in 1973 in Manhattan. They re-imagined and expanded the venue in Hudson, New York. She discusses the impact Linda made on her life, learning how to make an arts space happen on a small budget and how the space has changed over time.

This interview may be of interest to those who want to learn more about the American South in the 1940’s and 50’s, trains and railroad lines, experimental theater, musical theater, the Vietnam War, The Lower East Side of New York City, theater productions in churches and black box spaces, the women’s movement, feminisms, the development and planning of an arts space, changing technologies at a newspaper, and arts administration.

Anna Gurton-Wachter is a writer, editor and archivist. She studied photography at Bard College, library science at Long Island University and the history and theory of archives at New York University. Anna continues to live in Brooklyn, New York, where she was born and raised.