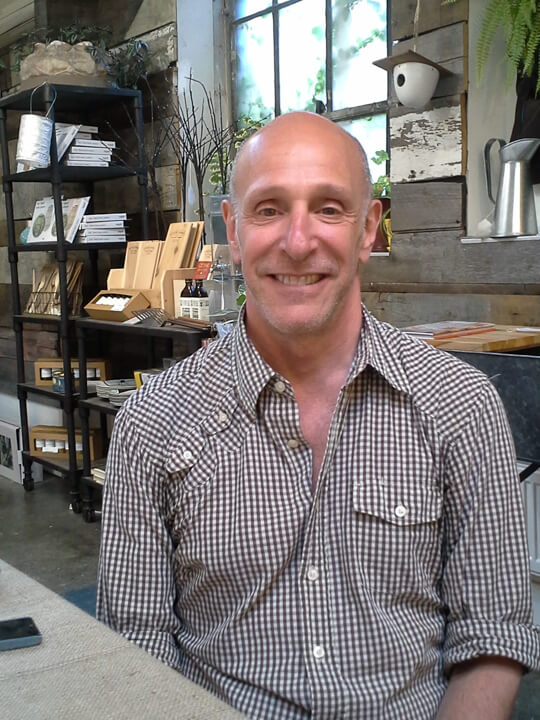 This interview with Chuck Rosenthal was conducted at his business, Valley Variety in Hudson N.Y on June 19, 2014. Chuck was born and raised in Philadelphia, P.A., educated in Boston and later moved to San Francisco, where he resided for 22 years before moving to Hudson 2 years ago. After college Chuck worked in the financial sector for several years. During a trip with two friends to San Francisco they made a pact to move there and several months later they did.

Chuck discusses the move to San Francisco as a major turning point in his life that included exploring and becoming comfortable with his sexuality, a change in career from finance to non-profit arts and an interest in community development. Later in the interview he makes some comparisons to the changes occurring in Hudson being similar to the period of time when he arrived in San Francisco.

He speaks of moving to Hudson as another turning point, this time triggered by turning 50 and the desire to be closer to family and friends in the Philadelphia and New York area. He describes the beauty of the Hudson Valley, the ease of acceptance in Hudson, despite his preference to keep a low profile. Chuck appears knowledgeable about the complexities of Hudson's past and present, describing it as 2 communities that could benefit from better city planning.

Some of the subjects discussed in this interview include: life changes, growing up within a seemingly large extended family, work/life choices, Hudson history and development, Hudson politics, economics, and diversity, San Francisco during the 80's and 90's, and family and friends.

Paula Smith is a librarian at Penn State Abington (PSA) with a background in business, information systems and science, and global education. She is working on an oral history project to amplify the voices of African American visual artists influenced by and practicing during the Black Arts Movement period (1965-1975). Paula is also interested in incorporating an oral history component into the Global Awareness Dialogue Project (GADP) a campus program she co-developed with her colleague Dr. Dolores Rafter Arevalo. The GADP serves to increase the cultural competencies of PSA faculty by providing thematic guest speakers and international/immigrant student panels to discuss and examine the impact of undergraduate international students at a commuter campus. Paula was born in Brooklyn, NY and raised in Philadelphia, PA. She is a developing artist, and an ardent book collector and infovore.