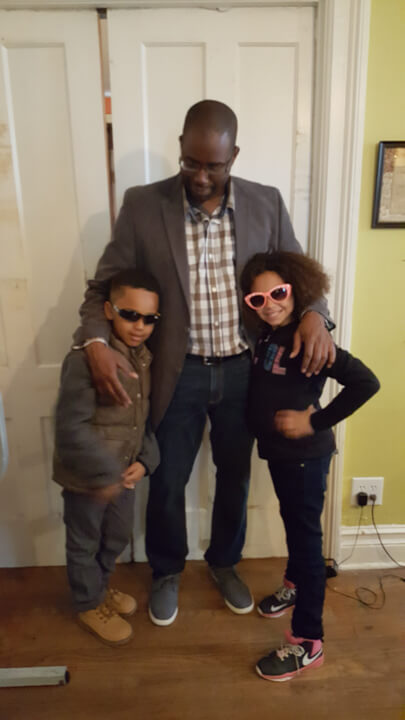 This interview with Cedric Fulton was conducted on July 3, 2017 in Hudson, NY.  Cedric is a father of two, a local leader, and community advocate who grew up in Hudson. In the interview, he discusses his early adulthood in Hudson, his identity has a father, and his role as a community member who organizes youth and represents the interests of various members, particularly African Americans. As a member of this community, Cedric serves as a liaison between organizations and donors. He shares fond moments of growing up with his single mother as well as learning experiences of young adulthood surrounding the incarceration of friends, loss of his mother and stepfather, and the birth of his daughter.  He discusses how 17 years of incarceration changed his visions about fatherhood, love, and life in general. He has passionate and progressive views about how to develop culturally-informed community development and youth-centered advocacy that addresses issues such as intergenerational poverty, housing, education, and displacement. Cedric discusses his work with the Stanley B. Keith Social Justice Center, his investment in developing the leadership and voices of young people, and the need for diverse leaders. He emphasizes the stakes in this work and how his organizing is heavily connected to having his voice taken away when he was young.  Cedric reflects on how the lessons from his past shape his relationships with his children and his future relationships with potential leaders and community members.

This interview may be of interest to those who want to learn more about how people’s activism and advocacy shape their consciousness and development as leaders; community organizing and political leadership in Hudson; underrepresented history of the Northeast; incarceration; race and class in Hudson; urban social and political life among African Americans; fatherhood.

Jallicia Jolly is a writer and researcher of race, gender, sexuality, and HIV/AIDS. She is a Ph.D. Candidate in American Culture at the University of Michigan where her doctoral interests include reproductive justice, illness and sexual politics, and grassroots health activism. She is interested in using oral history to document the intersectional health experiences of HIV-positive Black women in the Caribbean and the United States. Jallicia is also committed to publicly engaged, cross-cultural work that energize her interests in health humanities, arts activism, and the use of oral historical research as an intervention.