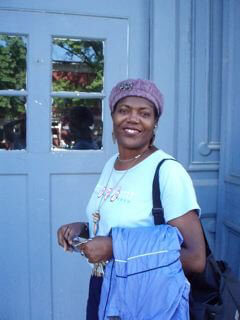 This interview with Carline Seide-Murphy was recorded in Niverville, New York on July 16, 2012. Carline was raised in Port-au-Prince, Haiti and has lived in the United States for 33 years, including 20 years in Niverville. She has run a mobile dentistry clinic, worked on community development projects addressing the needs of Haitians in upstate New York, and runs the Haitian Cultural Program on WGXC 90.7FM Radio. Carline has two daughters, a son, and a deceased son. In the three audio files making up the interview, some of the subjects discussed include: Carline's Childhood in Haiti; religion and spirituality; language; family, including Carline's relationship with her grandmother and her children; myth and beliefs; access to information; raising children in the United States; grief; the role of outsiders in and writing about Haiti; politics, economics, and culture in Haiti; and the Haitian community in upstate New York.

Alex Kendall works in the field of international development and global health. She has served as a policy analyst, a writer, an editor, a teacher, and a practitioner. She has worked on programs related to women’s health, HIV/AIDS, sexual violence, and youth education in a number of countries, including Haiti, Senegal, Rwanda, South Africa, and Cambodia. She is interested in approaching international development from a human-rights perspective, and hopes to use oral history to document the experiences of and learn from the communities in which she works. She loves exploring new places, climbing mountains, and being told stories. Alex is a native New Yorker, and grew up spending time in Columbia County.