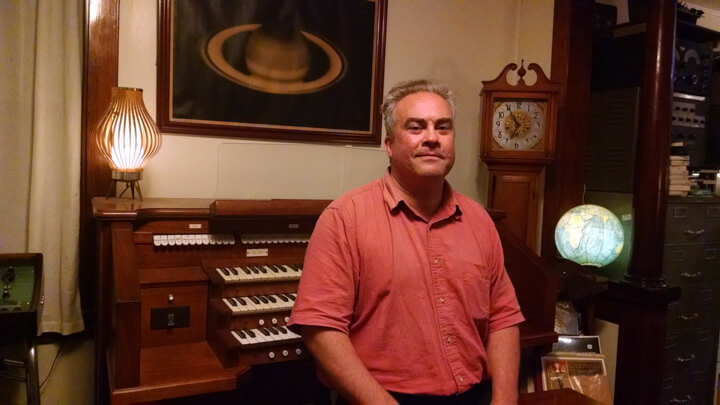 This interview with Brian Dewan was conducted on June 15, 2015 in Catskill, NY. Born in 1963, Brian Dewan is a musician and artist who moved to Catskill, NY in 2006. In the interview, he discusses Childhood in Lexington, MA, his father’s job in the Air Force, and his relationship with his brother. He describes his experiences as a student, particularly during primary school and at the Conservatory of Music at Oberlin College, and names his most beloved teachers, including his 6th grade teacher and a music professor, Jim Woods. He reflects on influences of artists, composers, and teacher, including John Cage, Benjamin Britton, Charles Reznikoff, and Flannery O’Connor, who have shaped him personally and artistically. He describes living and making art and music in Williamsburg, Brooklyn from the 1980s through 2006, and relays his experiences on September 11, 2001. He speaks about the development, with his cousin Leon, of Dewanatrons, which are handmade, bespoke musical instruments. Brian also reflects on his fascination with nostalgia and the repurposing of cultural value by different generations.

This interview may be of interest to those who want to learn about New York City, Brooklyn, and artistic culture in the 1980s, 1990s, and 2000s; the development of artistic sensibility; musical education in the late 20th century; teaching, mentorship, and pedagogy; musical and literary movements and influences; experimentation with musical instruments; and the development of nostalgic and retro sensibilities.

Julie Golia is a historian of gender, media, and urban culture. Currently, she is the Director of Public History at Brooklyn Historical Society, an institution with a robust oral history program. She is interested in using oral history to capture the Dynamicsm and diversity of Brooklyn for BHS’s archives.  She is also excited about the role that oral history can play in making history relevant and tangible for broad audiences.