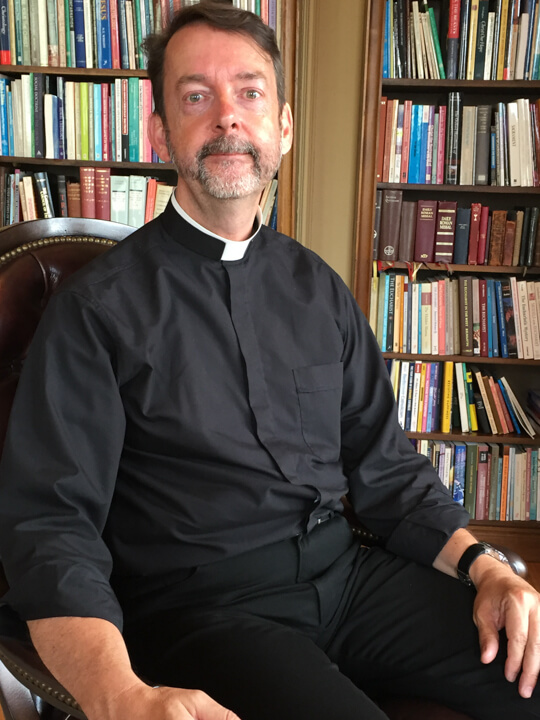 Born in West Wickham, Kent (England) in 1959, Father Anthony Barratt is the current pastor of Holy Trinity Parish on East Allen Street in Hudson, New York.  In his life-history interview, Father Barratt discussed a number of topics associated with his priestly formation as well as his academic, pastoral, and administrative duties in both England and in the Catholic Diocese of Albany.  Father Barratt described growing up in Kent (England) in a Roman Catholic family and the distribution of Roman Catholics in the south of the country.  At the end of his university studies in geography and geology, he entered seminary studies and was sent to the English College of the Pontifical Gregorian University in Rome, Italy, where he studies for six years (1980-1986).  While in Rome, he served as a deacon when Pope John Paul II celebrated Mass at the English College and, after his ordination, celebrated Masses that were attended by Mother Teresa of Calcutta.  He spoke of relations between Italians and students of the English College during the ten-week Falkland War between Argentina and Great Britain in 1982.  After returning to England in 1986, Father Barratt served in parishes and held teaching and administrative positions at Saint John’s Seminary in Wonersh, England.  While in England, he frequently met priests from the United States and learned of the shortage of priests in the Diocese of Albany.  Following a number of visits, he persuaded his bishop “to loan” him to the Diocese of Albany in 2004.  Before accepting the position of pastor of Holy Trinity Parish in Hudson, New York in 2017, Father Barratt served in parishes in Illion, Frankfort, and Latham, New York.  In addition to his duties in Hudson, he currently serves the Catholic community in Germantown, New York and holds a number of administrative positions in the Diocese that require frequent trips to Albany.

Father Barratt’s narrative would be of interest to individuals researching Catholic community life in the south of England, student and teacher/administrator experiences of religious formation in Italy, England, and the United States, and similarities and differences in Catholic culture and priestly responsibilities in different countries and the challenges of living and serving in communities with distinctly different Catholic cultures.

Chuck Kaczynski holds a doctorate in American religious and immigration history from The Catholic University in Washington, D.C.  His research interests include ethnic and racial tensions among both the laity and Roman Catholic clergy in the United States.  His essays and reviews have been published in Polish American Studies, The Polish Review, The 1930s: The Reality & The Promise, and People of Faith: Parishes and Religious Communities of the Diocese of Cleveland, a publication on which he also served as editor.