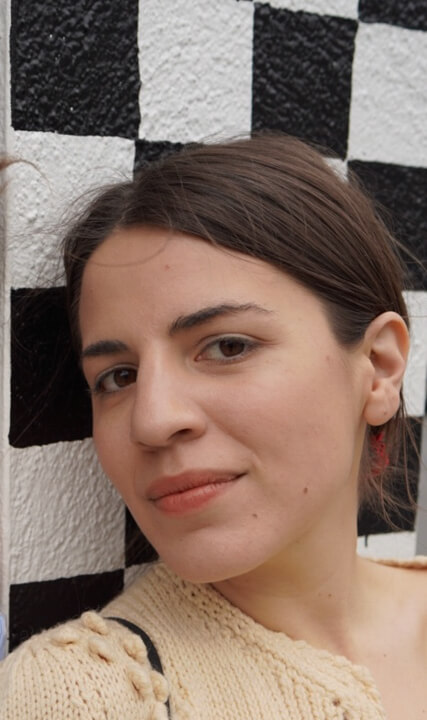 This interview with Annie Bielski was conducted on June 29, 2019 in Hudson NY, as part of a working exercise during I Am Sitting in a Room, Part I, Oral History & Writing.  At 29 years old, Annie describes herself as an artist, specifically as a painter and performer.  In the interview, she describes seeking comfort in doing repetitive tasks, like sewing, in a creative context.  She speaks of her first awareness of her creativity, when she first acknowledged herself as “artist” and the difficulty she has in claiming ownership of her identity as an artist.  She discusses being born and raised in Toledo, Ohio, where he parents, now divorced still live. She describes having certain hesitancy or guilt about living life as an artist, following her dream, when her parents did not have the opportunity to do so, and are still not doing so.  In May 2019, Annie received her Master of Fine Arts at University at Buffalo.  During that time she has lived and worked off and on in Hudson, NY.  But during the week of July 1, 2019, after already having taken all of her belongings to New Mexico on a two week long road trip, Annie will permanently move from the east to Albuquerque, New Mexico, to start a new chapter of her life.  She is excited, but is finding that certain friends and colleagues are questioning her decision, characterizing her decision, as following a man to the place where he lives.  She describes grappling with this, but believes she is doing what she wants with her life.  In New Mexico she will live with her boyfriend, continue to work as an interviewer of artists for a magazine, and work as an artist.

This interview may be of interest to those who want to learn about when in an artist’s life they first identify with the creativity; the comfort of an artist in calling themselves “artist”; the struggle of claiming the right to live the life of one wants to live when those around them, in particular parents, are struggling with their own life decisions; artists working in multiple areas of artistic expression; moving across country; and moving for a relationship.

Chelle Francis is 55 years old, and an intellectual property lawyer and consultant of 29 years. In conducting this interview, Chelle was interested in exploring Annie Bielski’s life journey as committed artist. Chelle has been involved in the creative world throughout her career, but not as artist. Chelle hopes to transition her time from the law and IP consulting to using oral history in non-fiction work.